Back pain often results from dysfunction of the sacroiliac (SI) joints. These are the joints that are found on each side of the pelvis connecting the sacrum (large triangular bone at the base of the spine) to each hip bone (ilium). Much controversy has surrounded these joints, as there was a viewpoint that the joint did not move and could therefore not cause pain. This has since been found to be false and more recently the importance of the SI joint has been described this way:

“The sacroiliac joint appears to be the single greatest cause of back pain. The range of motion is small and difficult to describe but, when normal joint play is lost, agonising pain can be precipitated… (the sacroiliac joints) are complex and not fully understood, but it is clear to the authors that they can have a profound effect on body mechanics… anyone who still holds the view that these joints are immobile can never hope to achieve control of common back pain.” 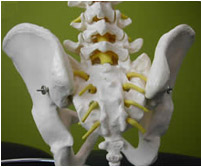 The sacrum (triangular bone at the base of the spine) articulates on each side with the pelvic bones at the sacroiliac joints.