It is most likely that spinal adjustments exert a reflex effect on pain and muscle tension through joint and muscle receptors. 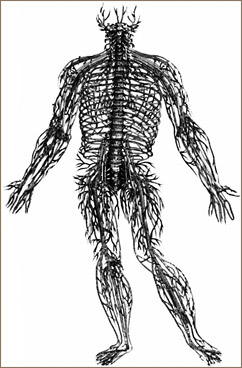 There are specialised receptors in our joints and muscles that help allow us to detect where the arms, legs, neck and head are in relation to each other and in space. The term used for this is proprioception. This phenomenon lets us walk in the dark and know where our limbs are, to close our eyes and put our finger on our nose, to detect small movement in our joints and many other tasks. It is thought that minor loss of this ability may play an important role in why we can injure ourselves.

It makes sense then to see what we can do to improve our proprioception.

The nerve fibres that transmit pain are very thin. The fibres that carry mechanical information (proprioception) are larger. These larger mechanical nerve fibres are more sensitive to lack of oxygen.9 Reduced joint receptor activity reduces the ability to inhibit pain in the spinal cord.10

The Adjustment and the Nervous System

It has been discovered that the controlled forces used in chiropractic adjustments are so effective because:

The speed of the adjustment appears to be a critical factor and not the severity or amplitude. As a result, all of our adjustments have been modified to revolve around high velocity, low amplitude thrusts.

In 1999 ten people with no pain underwent 11 different high speed, low amplitude spinal manipulations in all different regions of the spine. These people were measured using 16 pairs of surface electrodes placed on the back and limb muscles. It was found that: 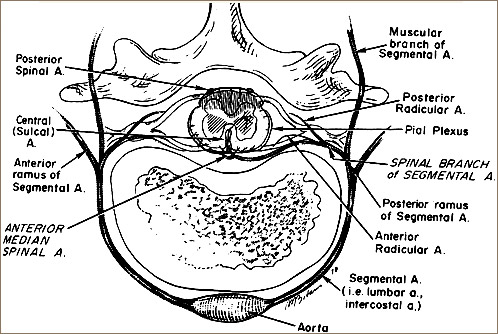 Segmental blood supply to the spinal cord and the relationship with the spinal nerves.

A reflex exists in the human spine from receptors in ligaments, discs and facet joints to the multifidi (deep muscles of the back) and possibly other muscles.14

Stimulation of these receptors within the disc (spacer between vertebrae) and facet joints15 elicits reactions in the deep muscles of the back that are so important in spinal control (multifidi & longissimus).

The reflex appears to be triggered when there is relative motion of two vertebrae, causing multifidi to become active. The aim of a chiropractic adjustment is to specifically create this motion between two adjacent vertebrae.

It is the co-contraction of front and back muscles that is the major stabilising mechanism of the spine. Sustained activities of the spinal muscles at jobs lead to muscle fatigue. The fatigue in the receptors “results in an exponential decrease in reflexive muscle activity, exposing the spine to possible injury and pain”.16

The Central Effects of an Adjustment

Thirty percent of the information regarding pain reaches the part of the brain that relays information on so that we are aware of where the painful sensation is coming from. The remaining 70% travels to an evolutionary older part of the brain. Much of this information goes to a region known as the periaqueductal gray (PAG). The PAG:

We know that the PAG is important in helping to regulate the amount of pain that a person is experiencing. An inability to activate this part of the brain may be involved in chronic pain or make particular people susceptible to chronic pain.

For many years, B.J. Palmer, the developer of chiropractic, practiced only upper cervical adjusting. It was known as “Hole-In-One”.